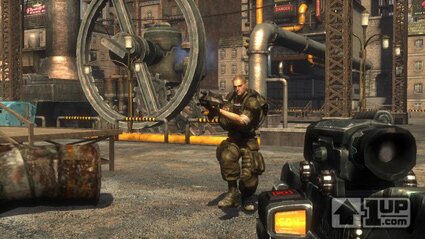 1Up takes a look at Huxley, the hyper-ambitious multiplayer extravaganza from developer Webzen. The 360 version is a year away, but it will include an exclusive single-player mode and the ability to shoot it out against PC rivals. Goodbye port, hello porthole to a brave new world of cross-platform gaming.

Every Xbox 360 owner knows at least one console-dissing gamer who never shuts up up about the supposed superiority of the PC experience, as if enjoying both platforms is a sin. That makes the idea of jumping between video game universes to blow away obnoxious nerds all the more appealing. It'll be very interesting to see how Webzen makes this work.

1. I have high hopes for this one. I can't wait to pwn my PC-loving friends with their "controllers suck and keyboard/mouse rule" crap. I've tried both, and I still prefer my controller and joysticks. But "to each his own" I guess.

2. PC gamers will easily have an advantage over the console gamers.
Sure some may prefer a controller over the mouse and keyboard, but it is simply more accurate to control a mouse than a stick on a controller.

I think they may compromise this by making headshots etc easier to hit on the 360, like in Halo.

I'm a bit weary of all the new MMOs coming out, i don't have the time nor expenses to play them all, so it's kind of frustrating that so many of them look so promising.

3. same tyler. i prefer my controller much much more than KM, but the mouse is more accurate.

still, im up for killin the nerds

4. I think the bigger issue would be to not allow any differential "mods/hax" via a PC version.

The ability to apply hax so easily to PC Games is the largest drawback to that medium. And makes the multiplayer experience frustrating for the ones trying to enjoy the game without cheating.

5. I actually expect that the controls might be similar to the way Quake 4 was handled on the Xbox 360. Aiming was a little fuzzy and "point in their general direction". Some people might call it "noobified", but if you can supress that urge to be a pro snob and let Webzen do what they need to do to make it fun, then everything will be just fine.

Of course, that will never work. There is always a vocal minority who knows more about game development and balancing cause they play "MLG" settings and got their butt kicked in a real tournament.

6. I'm very excited by this game. I haven't heard any mention of monthly fees. I hadn't even considered that. As cool as this game looks, I don't know if it would overrule my soon-to-be-addiction Phantasy Star Universe.

Too many good games on the way...

7. I think the PC dudes have the upper advantage in FPS but thats cause I play FPS on PC and Console and I see in my opinion that PC is a lot better. I would be playing PC games more be Heh mine is outdated and uh yeah.

8. There will be monthly fees if this is a MMO (and cross platform to boot). I guarantee it. Anybody who thinks otherwise is naive.