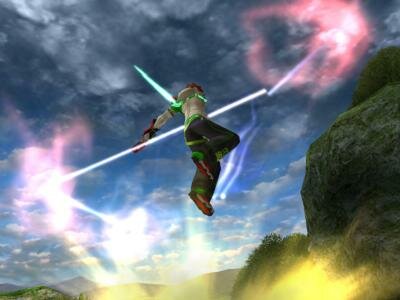 Hey folks. I'm the new guy, and this is my inaugural post. My inaug-u-post, if you will. Enjoy.

During E3, the fine people of PSO World sat down with Takao Miyoshi, producer of Phantasy Star Universe, and asked him a few questions. The interview covers some of the new features in the game, including race specific special abilities, player controlled vehicles (!), and the new player lobbies. The new lobbies will actually encompass entire cities and can host up to 1,000 players. The vehicles are varied and include tanks, jet skis, and even mountable beasts that breathe fire. When asked about the possibility of cross-platform play (the PC and PS2 servers already support it), Mr. Miyoshi said only, "It is actually something that is not finalized." Not finalized? That means there's hope right?

Whether or not 360 owners will be able to school PC and PS2 players, they can rest easy in the knowledge that voice chat will be 360 exclusive when the game ships this fall.

2. sounds good i like the idea of fast vehicles and lots of people.

3. mr half glass empty, eh? Only half a glass and nothing in it? You're one depressed son of a gun aren't you.

4. Give the guy a break! He has to try to impress dickheads like you all day. Not an easy task!

5. As a game designer, would you like to steer the franchise further towards an offline, epic story-driven game, or do you feel that the perfect balance between offline and online play has been struck with Phantasy Star Universe?

6. More & more I am thinking that Psu360 will have its own seperate server. I just hope they are trying to allow microsoft to do what they did when it came to FFXI.

8. Welcome on board, Richard !

Welcome to the party Richard =)

We are short on good non-Final-Fantasy RPGs for any console.

11. Why would anyone want to play w/ ps2 and pc ppl on te internet?? It's stupid!! Nothin like ps2 players trashin your connection up. Plus non of those platforms will be using headsets?? Why do u wanna play were your talking and others are typing or vise-versa? Thats just my opinion.

One more thing, the more ppl (platforms) playing PSU that gives them more of a reason to charge more on monthly maint. fees.

12. The fee wont go up too much, in Japan it should be around 8-10, I am betting it will be that or almost exactly taht here. I think they deserve it though, considering PSU is turning out to look like a really great game.