Waaaaay back before the last E3 ever, SEGA let everyone know that Full Auto 2 was coming to PS3 exclusively. Xbox 360 fanboys rejoiced, as they wouldn't have to play the sequel to "the game that proved there is a way to add automatic weapons and fast cars and make it not fun." Well, folks, those carefree days are over. It looks like the 360 may be subjected to even more mediocre car combat. Club Skill was apparently trolling around the European press site for the game when they noticed that 360 was listed as a platform, along with some updated images. This isn't exactly an official announcement, so there's still a chance we might all be spared.

In all seriousness, the first Full Auto did have a lot of promise. Hopefully, SEGA can make Full Auto 2 the game that it should have been the first time.

(Fanboy trivia: I was the guy who submitted the Full Auto 2 tip to Joystiq way back in May. Follow your dreams, kids, and you can shirk your daily work responsibilities, too!) 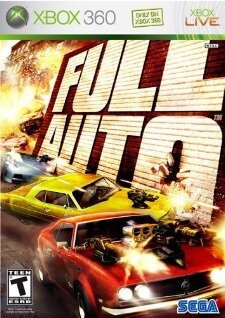 Last week saw the release of Full Auto, one of the only Xbox 360 games to get released post-launch. We even got our hands on a free XBLM demo last month. So, did the full version expand on the demo's action-packed, albeit repetitive, gameplay? Let's check in with the reviews, including Joystiq's own:
The bad news is that the consensus seems to be that Full Auto is a one trick pony. The good news is you ought to know if that one trick is enough to get your wallet out. Check out the demo, play it a handful of times.

As expected, the demo for Sega's ballet of guns and cars (what else) is up on the Xbox Live Marketplace for your enjoyment. Weighing in at roughly 650MB, it'll take awhile to download.

To all the snickering OXM readers out there who've been happily playing the demo for weeks now, just let us losers have our fun! You can download the Marble Blast demo.

[Thanks to everyone that tipped us off]

GameSHOUT is reporting that Sega's gun-infused racing game, Full Auto, will be exploding onto the Xbox Live Marketplace this Wednesday, January 25th. This will be the second title following Fight Night Round 3 to hit the Marketplace before retail stores; the full version of Full Auto is scheduled to hit retailers on February 14th.

Here's some more release news: the official release date of the vehicular combat game Full Auto has been set for February 14th. Nothing like a little Valentines Day action of high speed racing coupled with explosive carnage to show how much you care. You can also score a demo of Sega's new title in January's issue of Official Xbox Magazine.