We got a great deal for all the Canadian readers in Xbox 360 Fanboy land. Future Shop (the "it" electronics retailer in Canada) is offering an irresistible Xbox 360 bundle. What's included is a premium Xbox 360, G.R.A.W, XBL Arcade: Unplugged, Ridge Racer 6, and our little gem Gears of War. The price is pretty nice and may make you want to slap yourself and call your pet salamander Sally. You get everything for the low, low Canadian price of $449.99. Better than playing hockey in the Summer and is just an all around good deal isn't it, eih?

With the release of the Playstation 3 this week we'll undoubtedly see comparisons between it and the Xbox 360 in terms of visual prowess. It's inevitable, because some gamers base their purchasing decisions strictly on which console can produce the prettiest looking environments and coolest HD particle effects. I figured I'd add fuel to this upcoming fire by posting a little comparison between the Xbox 360 version of Ridge Racer 6 and the PS3 version of Ridge Racer 7. What's cool about these comparison shots is that they are of roughly the same environments and locations, depicting a direct and accurate comparison. Though, the screen grabs are just that, off-screen grabs of the games and the article is in a language I have yet to study. Take a look at some comparison shots, which would you give the blue ribbon award for graphics to? 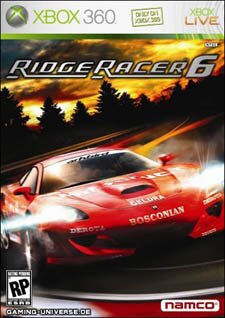 If a demo debuts then disappears, did it ever really exist? Depends on who gives a damn.

Despite a slight hiccup (see Major Nelson), the Ridge Racer 6 demo is once again available on Xbox Live Marketplace. No doubt gamers are throwing their still-in-the-plastic copies of Ghost Recon: Advanced Warfighter under the coffee table in order to spend a few hours downloading this one. If you'r one of the few sweating RR6's existence, you might  be wondering whatever happened to that missing King Kong demo?

Major Nelson has announced there is new Marketplace content for Ridge Racer 6 available, in the form of some music tracks, which ain't free, and some bonus cars, which are free. So if you're playing the latest in Namco's drift-racing series, check out those cars and let us know how they are. He includes the following caveat:

No love for Ridge Racer 6

Namco is feeling the burn on this one, at least here in the States. Coming from the number-crunching fellows at NPD Group, Ridge Racer 6 comes in dead last for sales during November having only sold 9,091 units.

It's a far cry from Activision's Call of Duty 2, the number one selling Xbox 360 title which saw 250,730 purchases. But Ridge Racer 6 was far from disappointing in Japan where it is the top-selling game and managed to peddle 29,891 copies in the first two days.