Right now, every 360 fanboy with a hopelessly old-fashioned 720p or 1080i max HDTV is wondering the same thing: What does Splinter Cell: Double Agent, supposedly the first Xbox 360 game to support 1080p, look like in glorious "True HD" (quotes added for sarcastic effect)? The 1080p debate is a rhetorical swamp filled with technical jargon, foggy "real world" benefits, arguments about performance trade-offs and general hype. Now that those of you with TVs capable of 1080p via component or VGA have gotten a look at the 360 in action post-Fall Update, what's your verdict? Is Splinter Cell really 1080p? Is the difference noticable? Is it worth the extra money you paid for your cutting edge HDTV? Please include the details of your set-up (TV model, screen size, inputs, etc.)?

"I was playing SCDA with some friends as a Merc and I saw a spy run under a truck that had a Comcast ad on it. I was out of grenades and told one of my teammates to toss a grenade under the comcast truck, only he didn't see it. Why? He saw what was by default a Hong Kong truck instead of the Comcast truck.

While I think in game ads are cool when in context, I saw some Comcast signage as well, but this dynamic ad rendering can affect gameplay--subtle but interesting side effect."

Dynamic ad placement in games is starting to become commonplace, and situations like this could be an unfortunate byproduct. Have any of you experienced similar problems? Do you think dynamic ads should be removed from multiplayer games where positioning is important, or at least made so every player sees the same thing?

Double Agent plus 12 mos of XBL in Canada

Reader Forbiddon from Canada spotted a great deal for Sam Fisher fans in the Great White North. Buy a copy of Splinter Cell: Double Agent for $59.99 CA (already $10 off the regular Canadian price) and get 12 free months of Xbox Live. The Best Buy Canada site currently doesn't mention the XBL offer, so you'll have to take his word for it.

How to get Double Agent for $48

After doing the post about the Assassin's Creed collector's edition, we couldn't help but notice this little tidbit. It looks like Play-Asia is offering the region free version of Splinter Cell: Double Agent for a measly $44.90. Add $3.10 shipping and you've got your own copy for $48. That's $12 dollars of the retail price. Not bad at all. We've done a story or two on region free Xbox 360 games in the past. For the uninitiated, 360 games released in Asia are often region free. Not only that, but they are usually completely identical to their English counterparts, right down to the manual.

We haven't confirmed whether or not this is the case with Splinter Cell, but it's a fairly safe bet. Did anybody here get their copy from Play-Asia? For future reference, Play-Asia maintains a list of its region free 360 games. You might want to bookmark it if you enjoy saving money.

What are you playing: sneaky edition

It's time once again for that all important question, what are you playing? This week marks the release of Splinter Cell: Double Agent so, we imagine quite a few of you will be spending your weekend snapping necks and being all sneaky-like. Me, I've still got to wrap up Dead Rising, Lego Star Wars II is staring me in the face, and I have yet to crack into Enchanted Arms. And let's not forget that the Phantasy Star beta is still running. Oh, and that the Project 8 demo should hit today -- still not out as of this posting. On the Live Arcade front, there's Lumines and 3 more episodes of DOOM to clear up (on Ultra Violent difficulty, of course).

Put simply, there's just too damned much to play. How 'bout you? What will you be playing this weekend?

Reviews for Splinter Cell: Double Agent are pouring in. The consensus, more of the same, but that's not a bad thing. Most reviews point to the subtle refinements of the series. So far, the streamlined multiplayer seems to be the most controversial aspect of the game. Most critics tend to think it's a step in the right direction, but all of them know that the hardcore SC fans won't like the changes.


As of right now, the game has an average of 87% on Metacritic. Not bad. Has anyone picked it up yet?

Has the 1080p console era arrived sooner than expected, courtesy of Ubisoft? The above pic is screen cap from a debug copy of Splinter Cell: Double Agent for the Xbox 360 showing support for "true HD" (to use Sony's patronizing marketing terminology). GamePro says they received confirmation from Ubisoft that the retail version will indeed support 1080p. Elsewhere, 1up says their contact told them "No, it's 1080i" but admits things are pretty hectic at Ubi right now, so who knows? All acknowledge that 1080p support is useless without the necessary update Microsoft, expected some time in the near future (although GamePro theorizes that it could be included on the Double Agent disc). Even then, without an HDMI solution from MS, the much-hyped resolution would be possible only via the rare 1080p HDTV (Sharp?) that supports 1920x1080 via VGA input.

Meanwhile, back in standard-def-trying-in-vain-to-read-that -Dead-Rising-text land, the po' folk are snickering because their snooty 720p neighbors now have to go out and buy a new TV if they want to remain on the bleeding edge of the 360 community.

How many lucky bastards already have a 1080p HDTV and are just dying to put it to use? How many don't think they'll get a 1080p set for years?

Correction: As several readers have pointed out, only 1080p movies using the HD-DVD drive require HDMI. Games will work over both HDMI or VGA.

We were a little startled to see a Splinter Cell Double Agent demo on Live today. The demo showcases the multiplayer mode. We haven't gotten our hands on it -- hell, we just woke up -- but we'll rectify that soon enough. It's a little fishy though. First we have a PSU demo on a Friday, and now a Splinter Cell demo on a Saturday? And then there's the Live outage on Tuesday. We smell a conspiracy.

What are you playing: use the Force edition

What did I spy when I got home on Wednesday, buried among a week's worth of useless coupons? My rental copy of LEGO Star Wars II, of course! So, naturally, I'll be digging into that posthaste. I've still got to finish Overtime Mode in Dead Rising, too. Not to mention I've only just finished the first episode of DOOM. And, come to think of it, I've still got a copy of Enchanted Arms that I haven't even touched yet. Now all the holiday games are starting to drop as well. Damn, how the hell are we supposed to fit all this stuff in?

But enough of my petty problems. The real question is -- as always -- what are you playing?

Michael Ironside, perennial badass, talks about his work as the voice of Sam Fisher in these two short videos. He also chimes in on his opinion of gamers in general. His impression: some of the most informed people around. Aw, shucks Michael, you're making us blush. Double Agent is getting closer every day. Anybody excited yet? Check out both videos after the break. 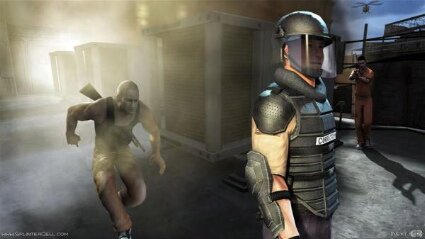 The official site for Splinter Cell: Double Agent is open for business (age validation required). The site is loaded with Splintery goodness like character bios, story info, features, multiplayer info, icons, wallpapers, screens, videos, and lots of flashy, um, Flash. I think you could safely call it a plethora of goodies. The game already impressed us at E3, and I'm sure Ken and I -- like wolves -- will scrabble at every bit until it's released. Like wolves, I say.

By the way, is it just me, or is Lambert starting to look a lot like Morgan Freeman?

The Splinter Cell  series always set a graphics and gameplay standard on the original Xbox and the franchise's first attempt on the 360 continues to impress. This  is one intense demo. It's starts with a literally mind-blowing execution sequence followed by the most harrowing parachute jump I've ever seen in a game. Ubisoft has gone for shocking violence with this entry. You can tell the guy in the pic above won't be dancing a jig any time soon, and his death convulsions before he finished the job with a grenade are a pleasantly disturbing  touch. The initial gameplay will be familiar to Sam Fisher vets, although the controls probably need to be tweaked a bit. The level I played seemed to lean a bit more towards blowing people away than stealth, but I may have just been trigger happy. I appreciated how Ubisoft squeezed something to do into sequences that formerly would have been straight CGI. Overall, Double Agent oozes next-gen production values and looks to offer a gritty tale to frame the well-rendered blood and guts. It may be my favorite demo so far.

The always popular Splinter Cell series is making its way to the 360 in the form of Splinter Cell: Double Agent. These new screenshots might be just enough to whet your appetite until the next media drop.

GamersReports tell us "this time around it has been revealed that the cinema sequeneces will all be real time and have a certain amount of player control. This means more than likely they are not stills from CG movie sequences." You should be able to get your neck-breaking stealth groove on this September.