Dyack responds to Too Human feedback 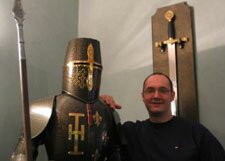 If you followed the 360 coverage from E3 at all, then you probably have some concerns over what we and other members of the press thought about Silicon Knights' Too Human. What we were shown was an early build that chugged along with framerate afflictions which gave off the vibe that it was way too soon to be playing the title.

However, you've got to keep in mind that Too Human is still in development, and as such, it still has some tweaking to go through. We knew this when we played it. Nailing down the framerate seems to be one of the last legs of the development cycle, so the showing at E3 didn't necessarily leave a bad taste in the mouth. Even so, 1UP decided to ask Denis Dyack what they thought about the show and the feedback that they received.

During the interview, Dyack guaranteed that gamers will not have an issue with the framerate and that no such problems will arise like they did at E3. He even went as far to say that there won't be any concerns in co-op or multiplayer either. Check out the rest of the interview for his other responses.

The big issue with Silicone Knight's Too Human is going to be the camera. It's completely controlled by the game, and you have to fight the urge to try and swing it around with the right analog stick when it gets in an awkward spot. It also likes to take a wide angle view leaving your human looking like an ant on the battlefield. The game puts you in the role of an Unreal Tournament-type warrior with the ability to make some pretty colors with a sword. You can bust out combos with the right stick and take out waves of insectoid enemies or dual wield a pair of laser guns and blow them away. The combo action is supposed to be super-deep but it didn't feel that way when I played. Pressing B at certain times  launches your most powerful attack, which looks cools but unleashes a looong canned sequence.  I assume you unlock more moves as you progress. The framerate hitched when things got crazy.

Not sure why I keep thinking of this game as an RPG when it's the total opposite. Maybe the title is a little too esoteric. I'd call it a sci-fi 99 Nights with a little less foot traffic.

Vidcam-capture of Too Human gameplay

Posted May 3rd 2006 5:30PM by Christopher Grant
Filed under: Too Human 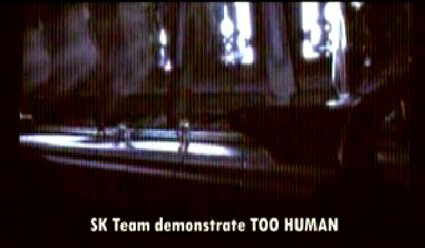 Following their interview with two members of the Too Human development team, Bytesector returns with some camcorder footage of actual Too Human gameplay! We'll be seeing plenty more of this next week at E3, but if you've been waiting to see how Silicon Knights' much-anticipated action game plays, then you'll be pleased to know: it looks action-packed!

As was written in EGM this month, there appears to be a plethora of maneuvers to keep the action exciting and the repetition to a minimum. Most interesting is probably the camera. Much of the demo appears to be a user-controller camera, but there are scenes where the camera automatically selects a dramatic angle for the action. This technique was used to great effect in last year's God of War, and looks to be similarly effective in this short bit.

Microsoft's Gamerscore Blog has also put up some screens of Too Human on their Flickr page.

(Before this post was even done, the video has been removed. It's only a matter of time before someone gets this up at YoutTube, or the like, and we'll update the post then. Sorry!)

(Update: Big ups to bv for tracking it down at the shiny new GameVideos site.)

Interview with Too Humans 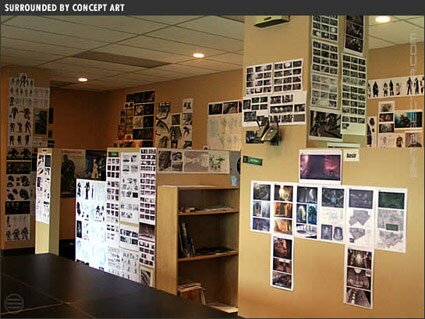 If you're too excited about Silicone Knights' 360-exclusive sci-fi actioner, Too Human, you'll be interested in ByteSector's interview with Art Director Carmen Dix and Sound Director Steve Henefin.

Those scans from this May's EGM featuring tons of Too Human coverage that we posted about last week, and had already been taken down, have (unsurprisingly) cropped up elsewhere on the internets.

If you didn't think Too Human was ambitious before, prepare to read a compelling argument otherwise. If you're familiar with Silicon Knights' Denis Dyack, you already know his interests are varied; Too Human ranges from Norse mythology, Nietzsche, and Shakespeare to God of War, Metroid, Zelda, and Phantasy Star Online.

Silicon Knights has been planning this game out for a long time now. In fact, Too Human was attempted on the PlayStation and GameCube before ever landing on Microsoft's new console. With that said, it comes as no surprise that this game looks nothing short of spectacular so far. They've put a lot of TLC into this and managed to pull off the grungy sci-fi-looking elements with style, but at the same time doing some amazing things with incredibly lush environments and elegant architecture.

You could sit here all day and read about it, but words won't do it justice. Drop by and check them out to see why you might be one of the gamers picking this up next holiday season.

[Thanks, Sadat; EDIT: The images were actually removed at the request of the developer. Sorry guys- You can check out Joystiq for some other mag scans.]

Too Human gets cover treatment in May's EGM 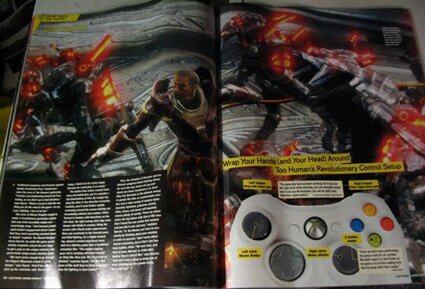 Turns out those small shots of Too Human that we linked to last week were from a print mag, May's issue of EGM to be precise. Silicon Knights' upcoming title -- part of a planned trilogy and one of the much anticipated "second-wave" of 360 games -- gets some real VIP treatment, with a dozen pages of coverage, including the cover and the table of contents.

Super fansite TooHuman.net got their hands on high-res scans of the entire spread but, as to be expected, were asked by the powers that be to remove them. They are still hosting the low-res camera shots ... though I'm going blind trying to read that text. 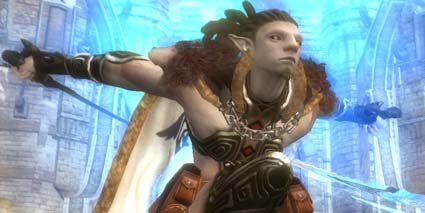 Feast your eyes on the images that have been showing up lately. GamersReports scored some nice, albeit small, screenshots of Too Human. The quality isn't the best (probably from a print mag), but they give you a decent idea of what to expect. Then there are some Ninety Nine Nights screens available, not to mention a Japanese video that started airing. These images are much better, so be sure to check them out.

It's all a prelude to E3! Expect a barrage of sensory overload come May.

A preview of Silicon Knights' Too Human

Following their preview of Bioware's sci-fi RPG Mass Effect, UGO has a preview of another developer's game that had some striking similarities: both are being developed in Canada; both are sci-fi stories; both are written in-house, and not licensed; both are part one of a planned trilogy; and both are part of the highly anticipated "second wave" of 360 exclusives. This game is going to come as a huge surprise to those of you that didn't read the title to this post... Silicon Knights' Too Human!

The preview is pretty by the numbers, covering the story and basic gameplay. They do remind us that although the game began its life on the PlayStation, then the GameCube, the 360 version is being developed from scratch, differentiating it from titles like PDZ and Kameo that were criticized for their long development time and last-gen heritage.

See also:
Denis Dyack on Too Human and the future of gaming

Denis Dyack on Too Human and the future of gaming 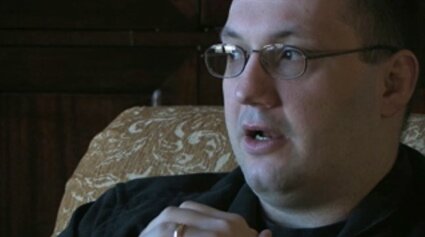 Denis Dyack is the head honcho of Silicon Knights, the Canadian game-developer working on one of the 360's most anticipated "second wave" titles, Too Human. Formerly a second-party developer with Nintendo, Silicon Knights is known for darker titles like Eternal Darkness: Sanity's Requiem and their excellent Metal Gear Solid update, The Twin Snakes. Expectations are high for Too Human and--especially if you've played any of their other titles--probably justified.

Several years ago, Dyack was being heralded as one of gaming's most thoughtful and interesting game designers, paving the way for collaborations with industry giants like Shigeru Miyamoto and Hideo Kojima. Following their departure from Nintendo, Dyack and co. have laid been laying low. Now GameSpy has posted a 10 minute interview with Dyack where he lives up to those expectations with some cogent commentary on the console wars and content:

"I really think that the perceptual threshold of what people see with different technologies is getting smaller and smaller, so what they're going to see with different technologies--the PS3 and the 360--are going to be so minor and small that I don't think the average consumer is going to notice anymore.  So what you're going to start to see is the commoditization of technology, where really the technology becomes less and less valuable.  So the most important thing is going to be the software. And when that happens, people are really going to focus on content..."